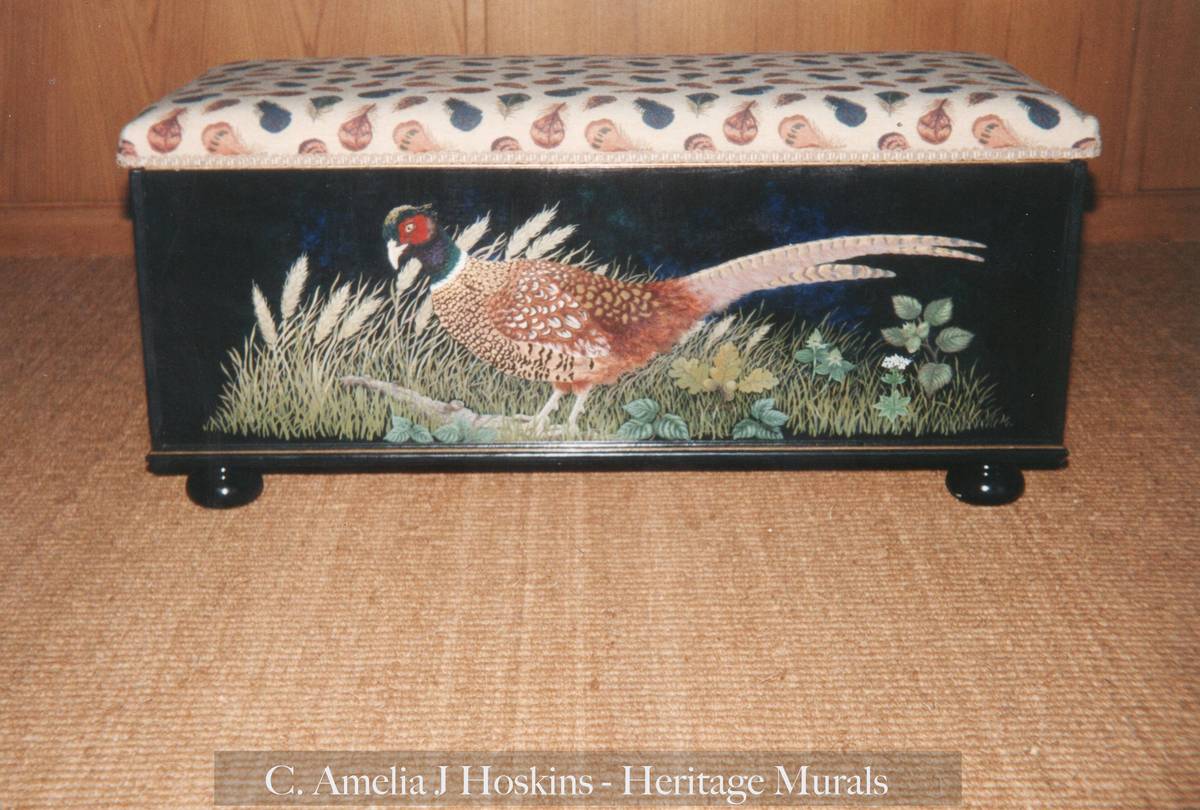 MDF new chest for library with equestrian homestead on edge of Dartmoor.  Male pheasant one side and female pheasant the other side.  Colours chosen to coordinate with top upholstery fabric.  Navy feathers colour as box background was very successful. 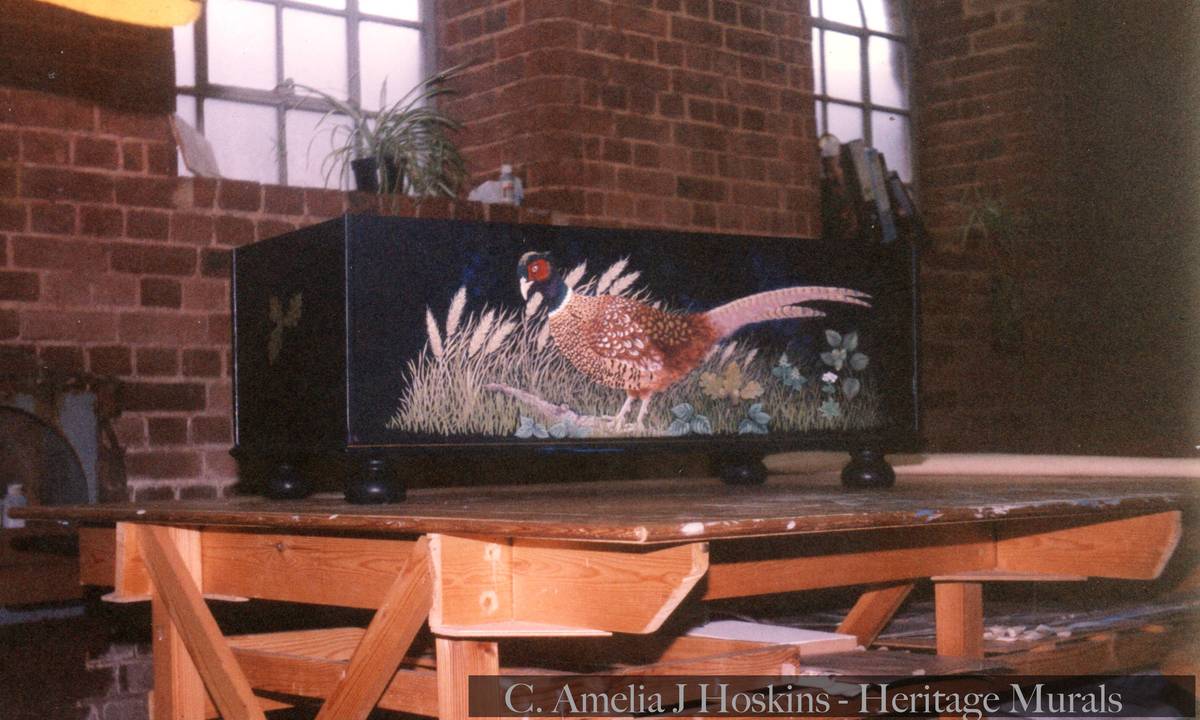 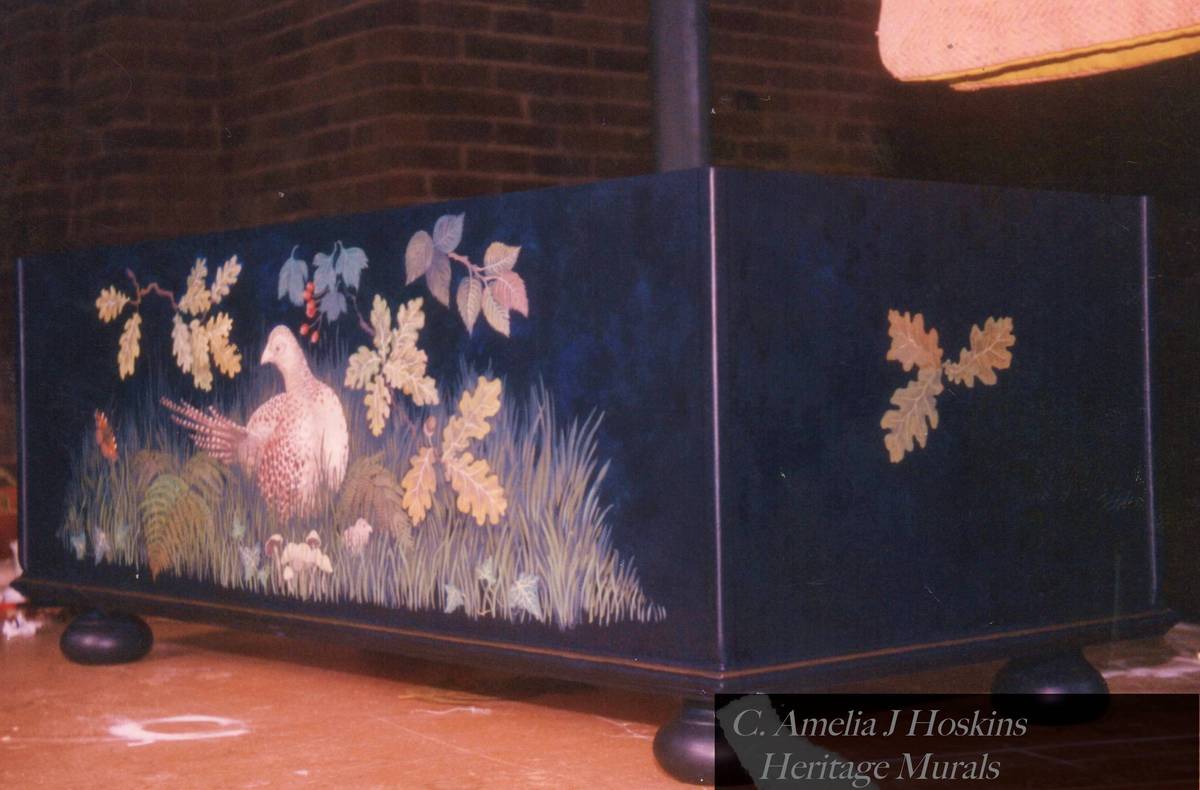 Box being painted in a previous Exe Mill workshop.  Female pheasant on box back is very pleasant with woodland border growth.  Ferns, oak leaves and hawthorn leaves with berries, chosen because pheasants live along the verge where woodland meets field.  MDF (medium density fibre board) gives a smooth surface for painting but the first white primer coat needs sanding due to 'fluffing'.

Same client wanted this antique chest painted for her library room.  She had followed the Oregon trail in holidays and wanted the story on the chest; an unusual and rewarding idea to research. 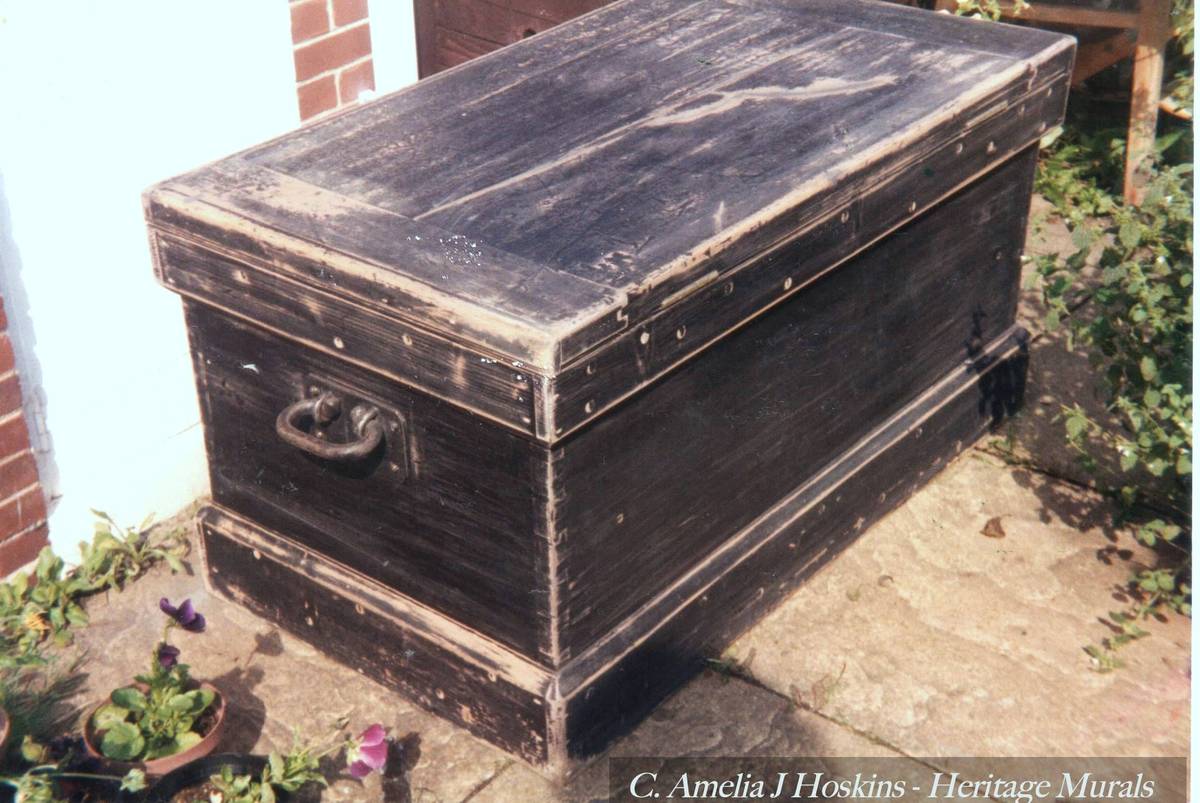 Chests sourced from salvage centre.  Bleached out wood can be sanded before painting, but varnished wood must be stripped with varnish remover, cleaned and sanded.  Waxed wood needs 95% removal with wire wool and white spirit.  Expect to have brown colouration showing through paint in places.  Base preparation could be a wood dye for translucent background or standard primer for full paint cover. 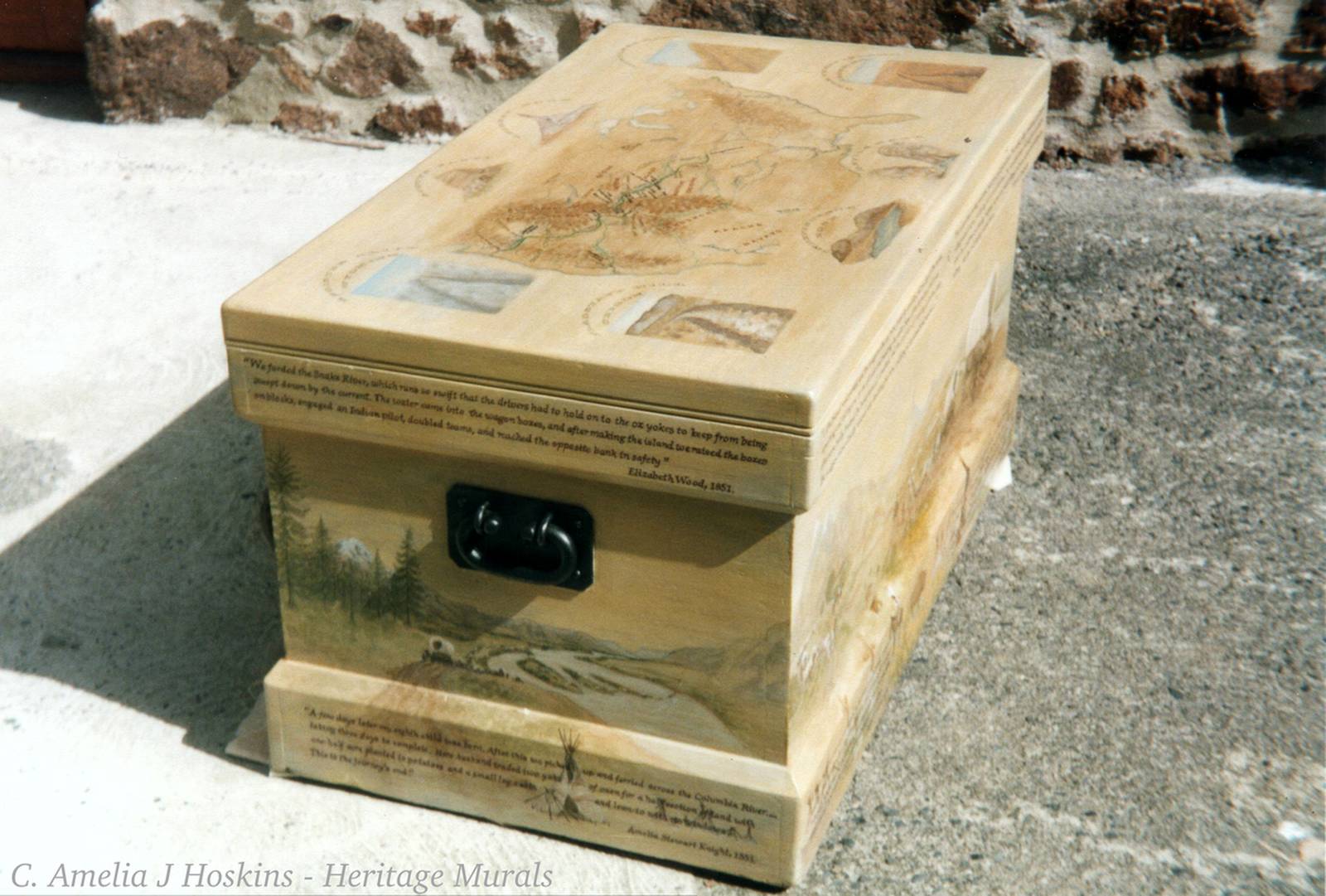 Chest top design has map of the Oregon Trail with Rocky Mountains and Native American tribal named regions.   Vignettes around map show trail markers and gullies left by the wagons, from photos.

Chest front and end shows the wagons at the North Platte River with a wagon circled encampment grouped in distance.  Reference was a painting by 'William H. Jackson, whose company camped near Chimney rock in 1866'.  The base and lid edge border has stories from the wagoners' diaries.   Click images to enlarge. 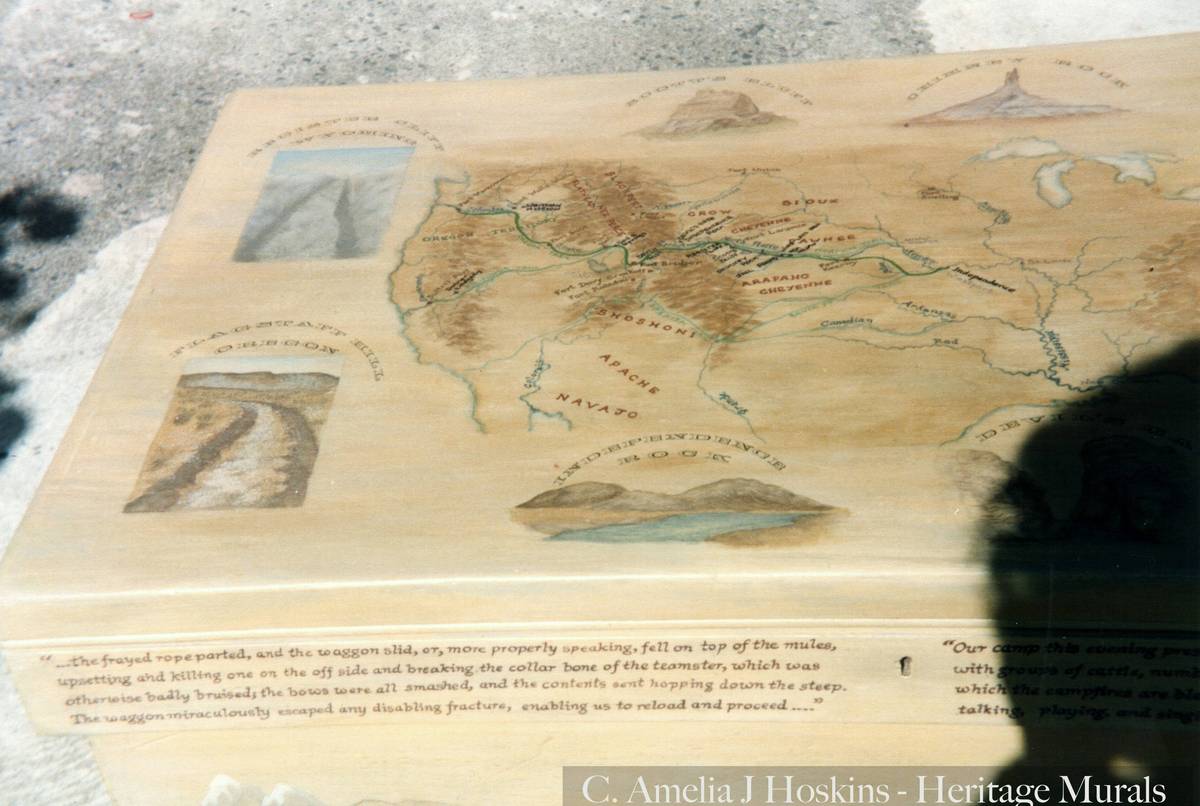 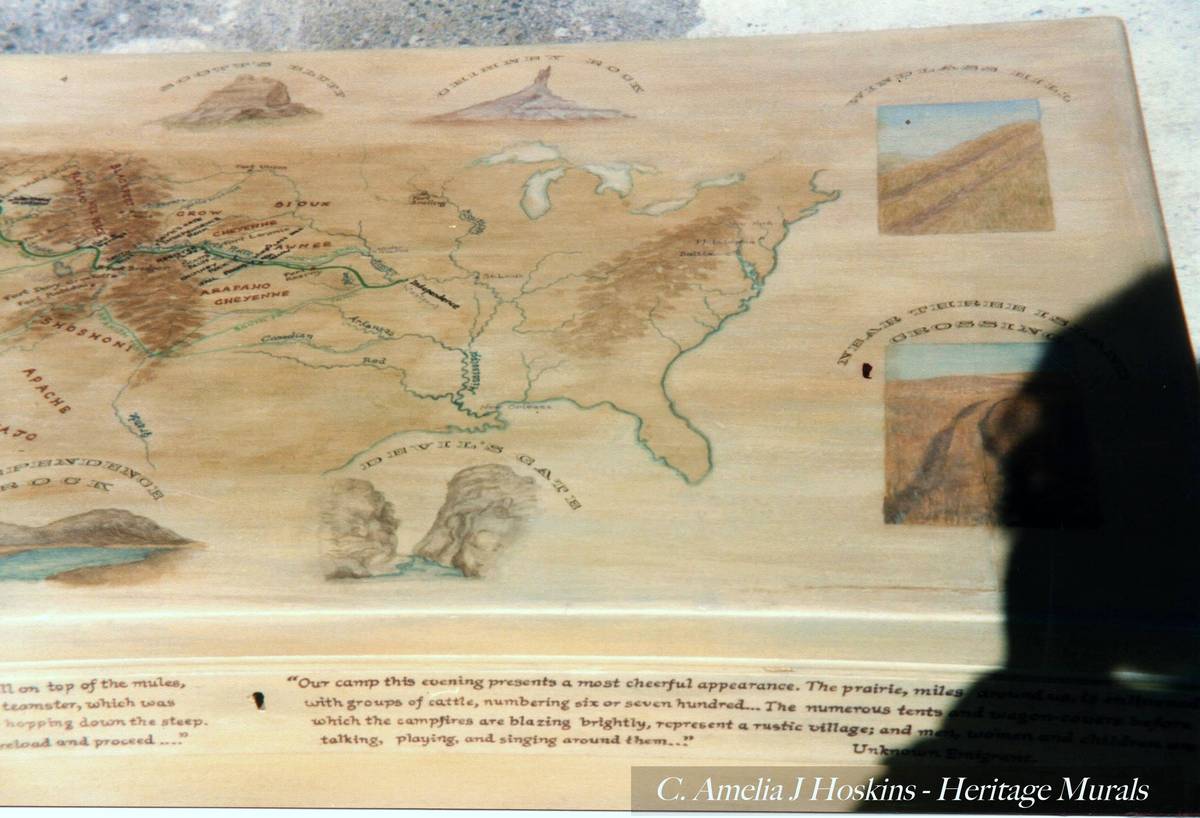 Writings on chest are taken from migrant diaries, the dates showing a constant wave of settlers.

“The frayed rope parted, and the wagon slid, or more properly speaking, fell on top of the mules, upsetting and killing one on the off side, and breaking the collar bone of the teamster, which was otherwise badly bruised, the bows were all smashed and the contents went hopping down the steep.  The weapon miraculously escaped any disabling fracture, enabling us to reload and proceed without much delay.  Two more moderate descents brought us into a lovely wooded dell."        William Kelly, 1849, Windlass Hill. 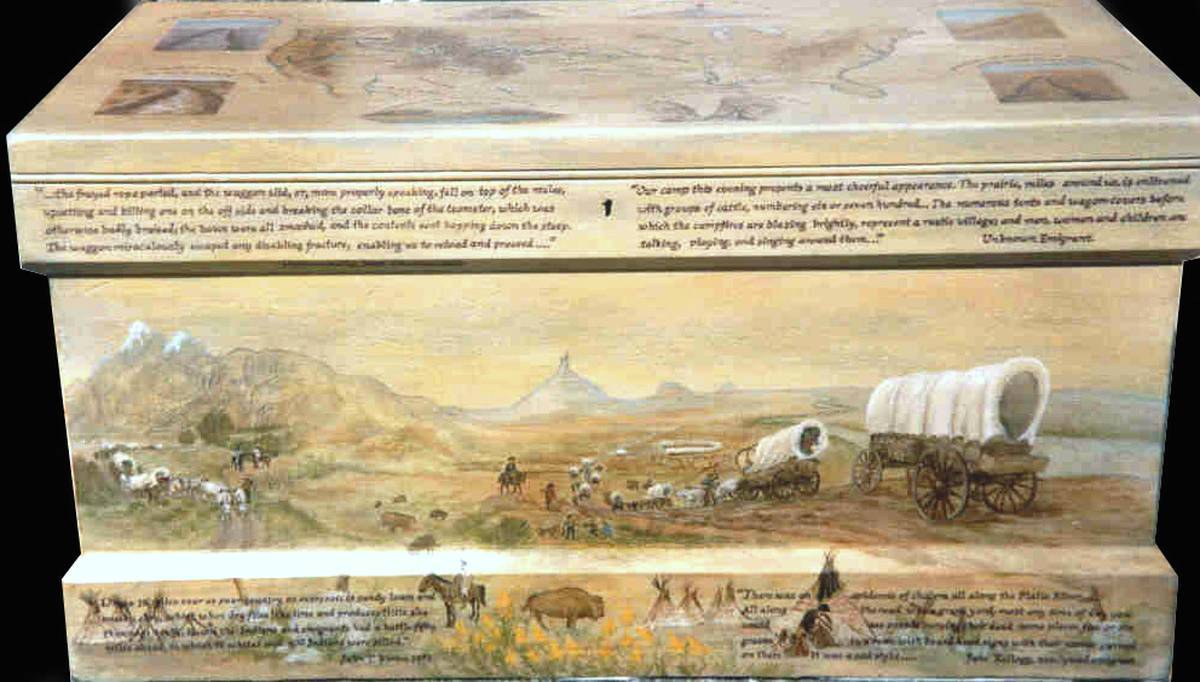 "Our camp this evening presents a most cheerful appearance.  The prairie, miles around us, is enlivened with groups of cattle, numbering six or seven hundred...the numerous white tents and wagon-covers before which the campfires are blazing brightly, represent a rustic village; and men, women and children are talking, playing, singing around them...while I am writing, a party at the lower end of the camp is engaged in singing hymns and sacred songs"     Unknown emigrant.

"We forded the Snake River which runs so swift that the drivers had to hold on to the ox yokes to keep from being swept down by the current.  the water came into the wagon boxes, and after making the island, we raised the boxes on blocks, engaged an Indian pilot, doubled teams, and reached the opposite bank in safety".  Elizabeth Wood, 1851. 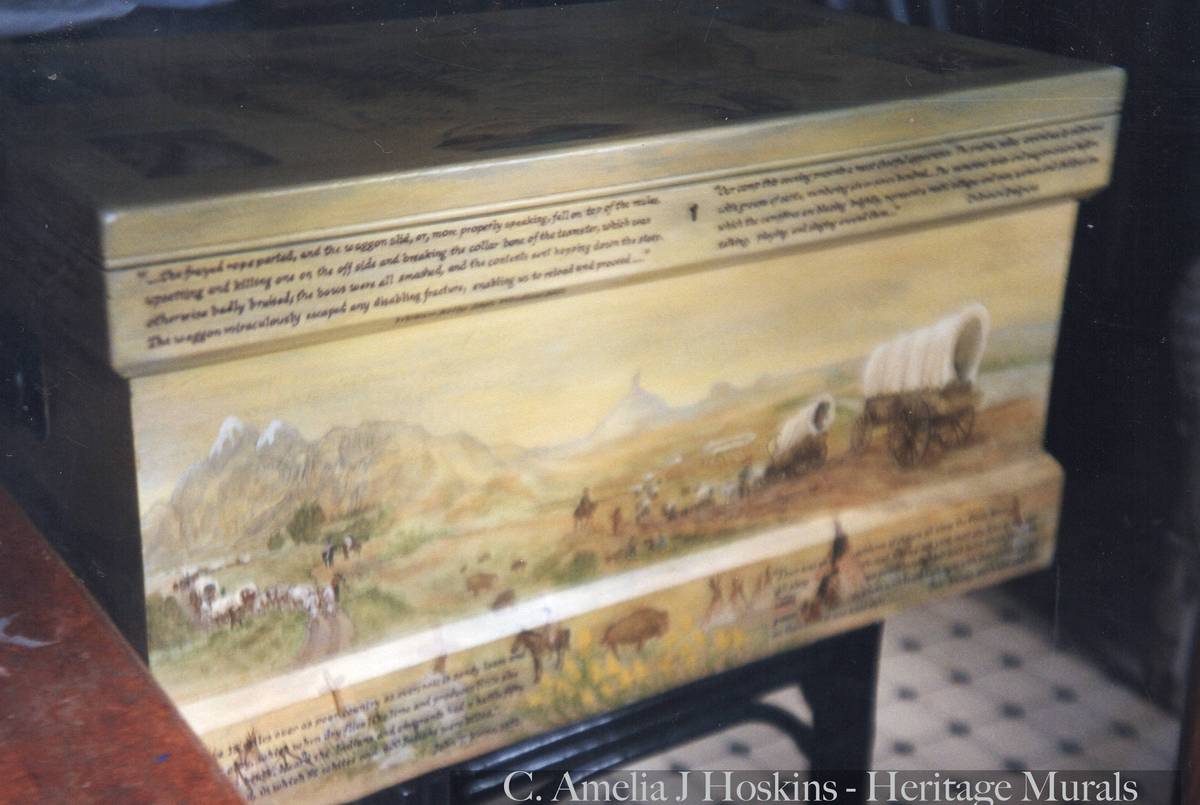 "Left the Missouri river for our long journey across the wild uncultivated plains and unhabitated except by the red man.  As we left the river bottom and ascended the bluffs the view from them was handsome!... with good courage and not one sigh of regret I mounted my pony...ingoing some two miles, the scene changed from bright sunshine to drenching showers of rain..."          Lydia Allen Rudd, 1852.

"A few days later my eighth child was born.  After this we picked up and ferried across the Columbia River...taking three days to complete.  Here husband traded two yoke of oxen for a half section of land with one-half acre planted to potatoes and a small log cabin and lean-to with no windows.  This is the journey's end."          Amelia Stewart Knight, 1853

"The train was strung out...there were old men pulling and tugging at their carts, sometimes loaded with a sick wife or children, women pulling along sick husbands, little children six to eight years old struggling through mud and snow.  As night came on, the mud would freeze on their clothes and feet.  Such assistance as we could give was rendered to all.."          Daniel Jones, leader of Mormon relief effort, 1856.

Additionally to coordinate with Oregon Trail chest theme, bedside cupboard and chest of drawers were painted with flowers from the Oregon Trail, which the owner had observed and explained in detail, so I could research prairie images which she verified authentic to use.  Beige background is dry brushed (streaked) in several beige tones to give effect of dry bush lands and dusty trail, similar to chest. 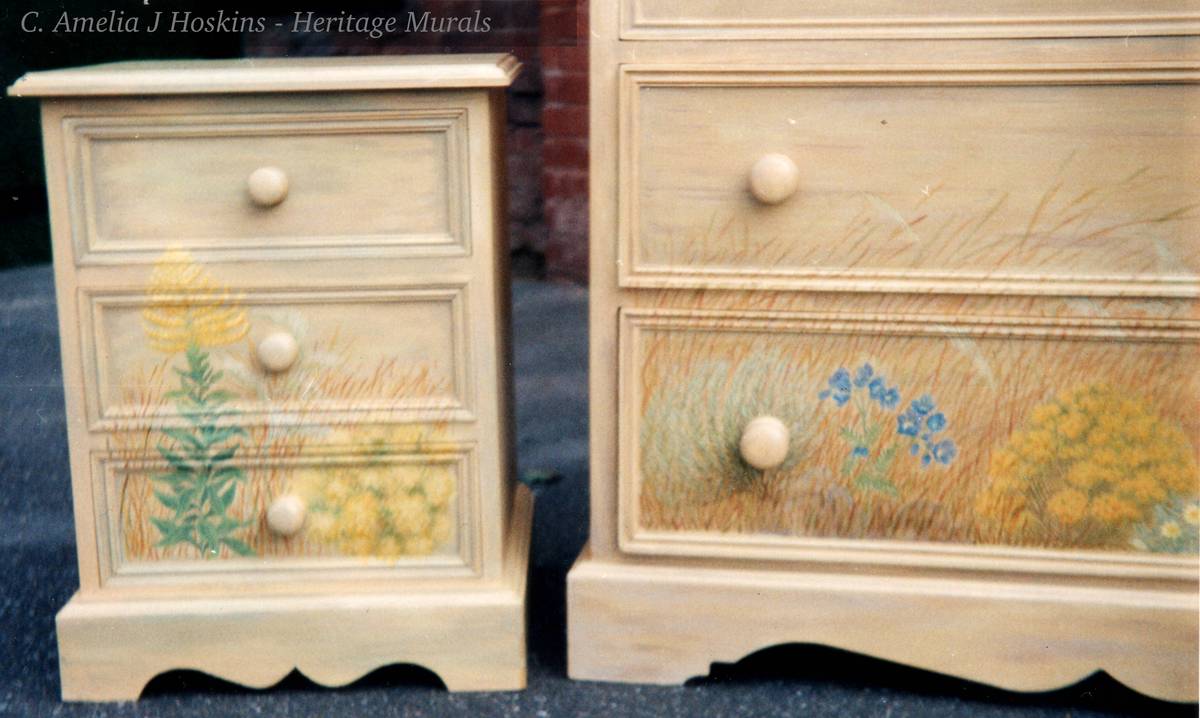 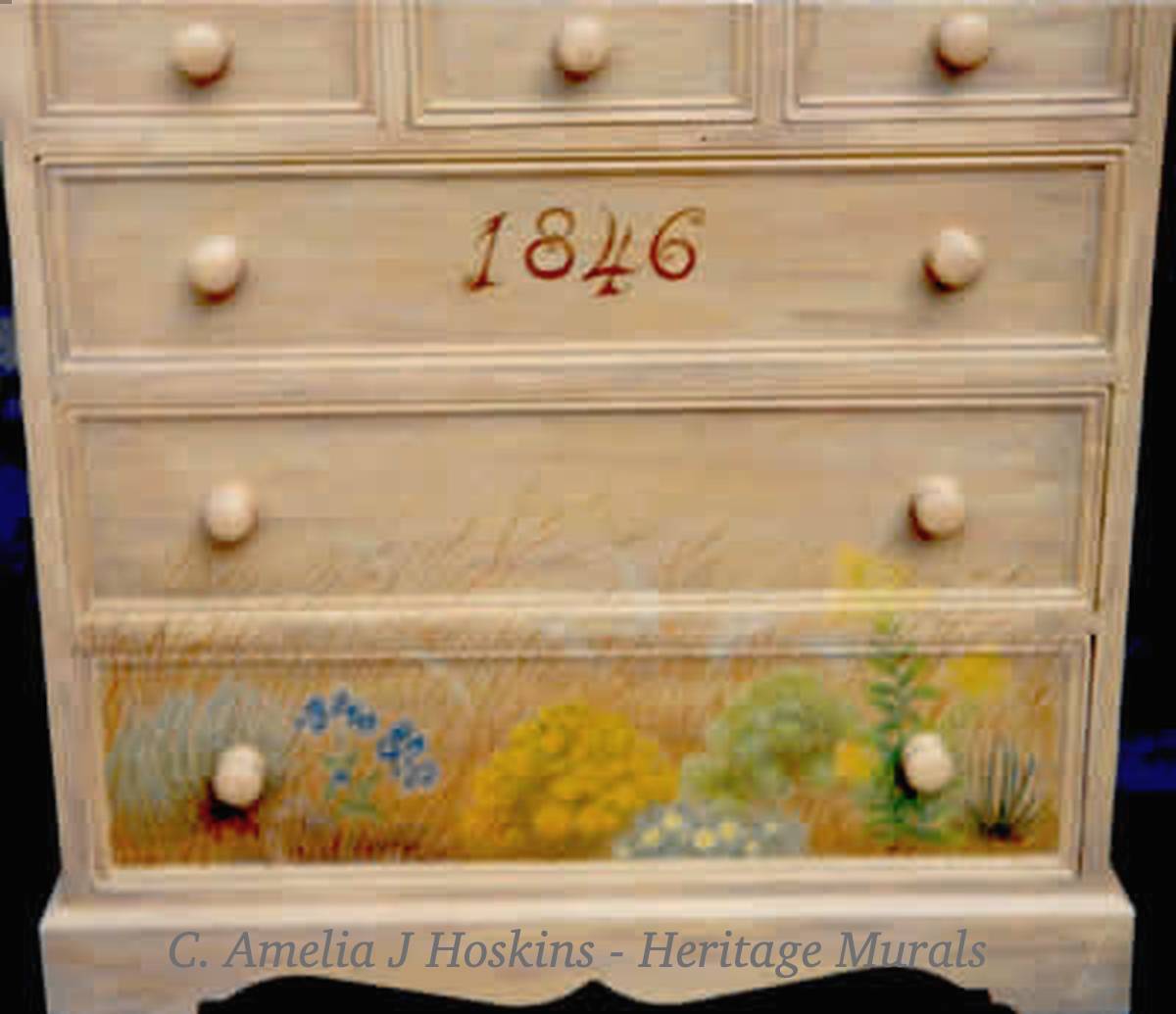 Toy chest for baby ETHAN, name and year on chest top.  Winnie the Pooh images taken from books illustrations. No copyright infringement applies to one personal item (not mass production).  Stronger blue at bottom, with lighter blue for the images works well.  One end has Ethan's toys, the other has the Eclipse of that year.  Back view not shown has hedgehog family 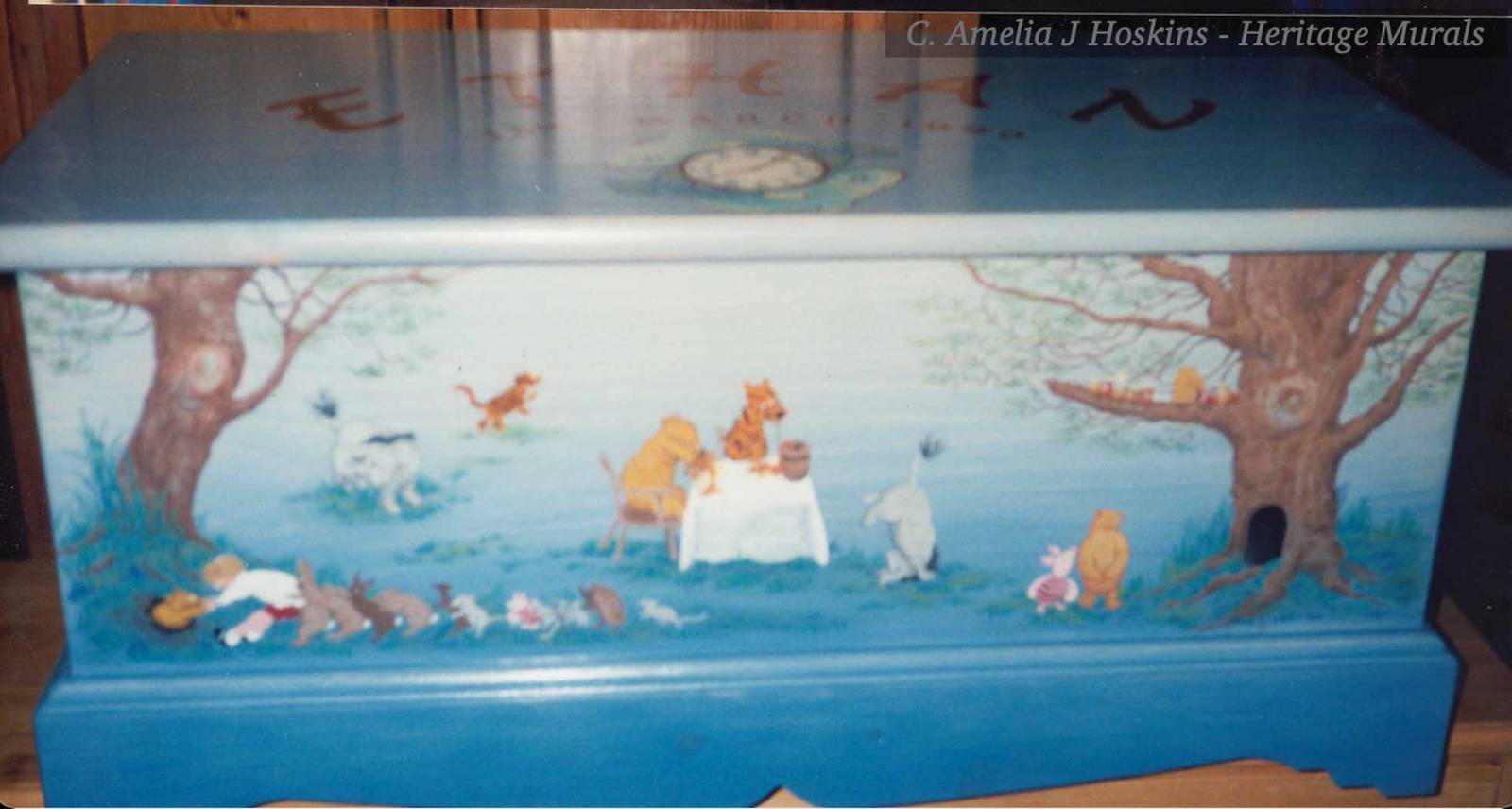 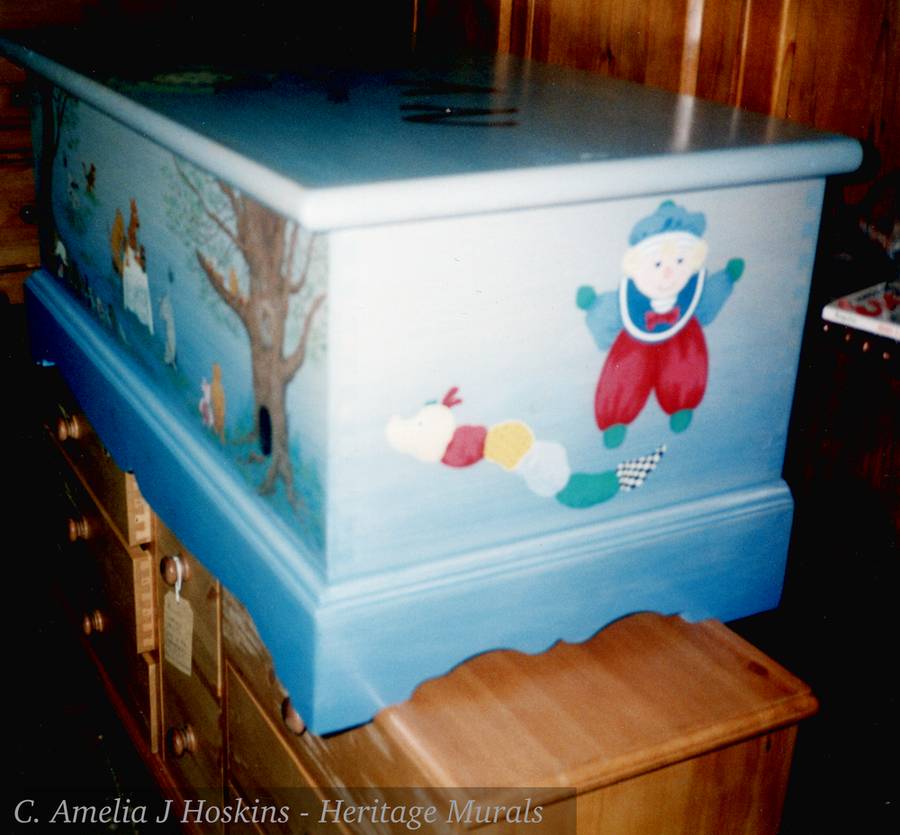 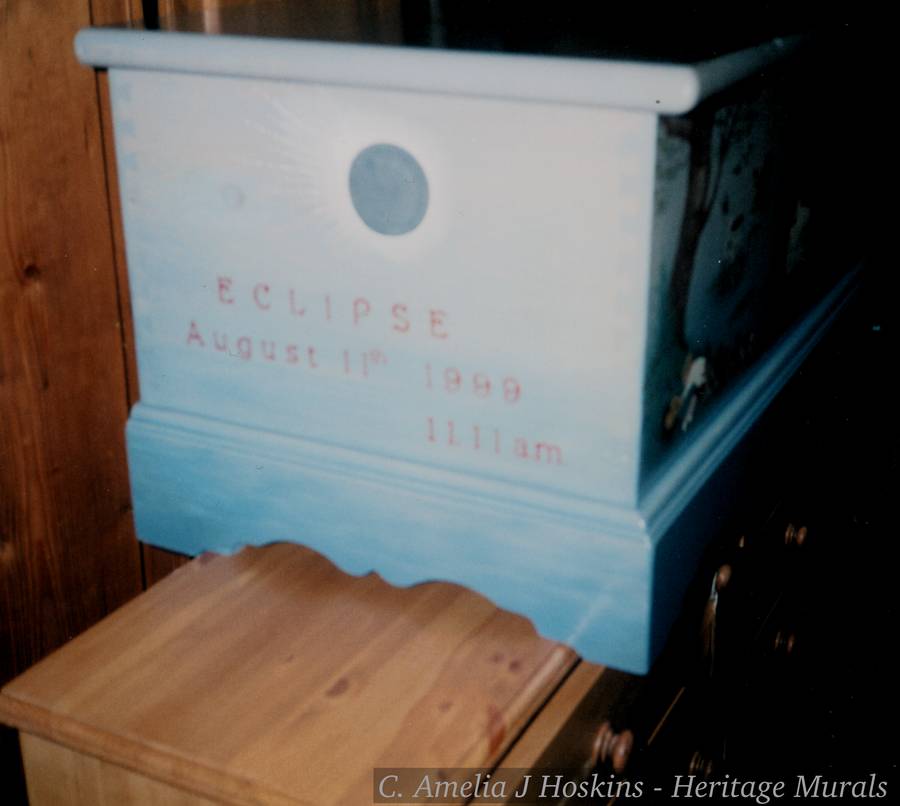 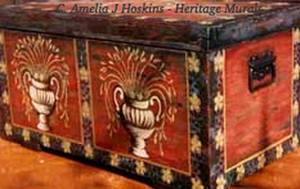 Traditional designs work well as simple motifs on boxes.  Dark backgrounds useful as boxes get a lot of scuffing.  Simple to find a motif and enlarge, adding borders.

Commissions taken for chests for bedding storage or toys with hinged lid in any wood: beech, oak, ash etc.  Or supply own box.  Basic box price depending on wood.  Approximate costs GUIDE is variable, depending on amount of artwork.  Painting price:-