A variety of historic and modern public space murals

Picasso's war mural is a masterpiece of powerful imagery

Although not a fan of Picasso, I saw Guernica in the Prada Museum, Madrid in late 1980s after it had been returned from New York to Spain in 1981 only on death of Franco, as per Picasso's wishes.  It was set in glass in the centre of a gallery, which in fact gave it more gravitas; being set in the glass box it encapsulated an historic time.  Its the absolute opposite of what I aim for in murals, to show nature's landscapes and forms; but artwork set in public spaces can teach people about the world.  In Picasso's time this artistic reaction to events of his time in Basque country and Spain is crucial, and his abstracted semi-cubist style aids in portraying violent destruction.

A Symbol against war

Pablo Picasso painted Guernica in 1937 for the International Exposition dedicated to Art and Technology in Modern Life, celebrated that same year in the city of Paris. One year before, on the 17th of July 1936, a bloody civil war that opposed the left wing republican government to a right-wing military uprising had started in Spain. It was in response to this event and the ongoing civil war it provoked that the Spanish Government asked Pablo Picasso to create a painting for its pavilion at the 1937 International Exposition – to expose the horrors of the conflict to the rest of its European neighbours and bid for their aid.   ~ Jordi Julian

Image source unknown; from Sorrento Info events site 2014.  Guernica is a huge painting, hence a mural:  3.5mts x 7.8 mts (11 feet by 25.6 feet).  Sections of images have been simplified in comparison to some preparatory drawings Picasso did before the Basque bombings, in particular those of Woman with Child.  His own mistress had had a baby 18 months before the bombing which would have made him empathetic to the plight of mothers in war.  It is also a complete reversal of the traditionally angelic portrayal of 'woman with child' paintings throughout history.  The mood of the painting has counter parts in the work of William Blake. [link to horror drawings]

'The Women of Guernica'  by Anne Wagner

Picasso had completed a series of drawings that led him to this stage, 12 in all, each numbered and dated; it is as if, in his eyes, the end was in sight. Then he put the project aside until after Guernica was bombed on 26 April. On 1 May 1937, he began all over again, to produce the mural we know. 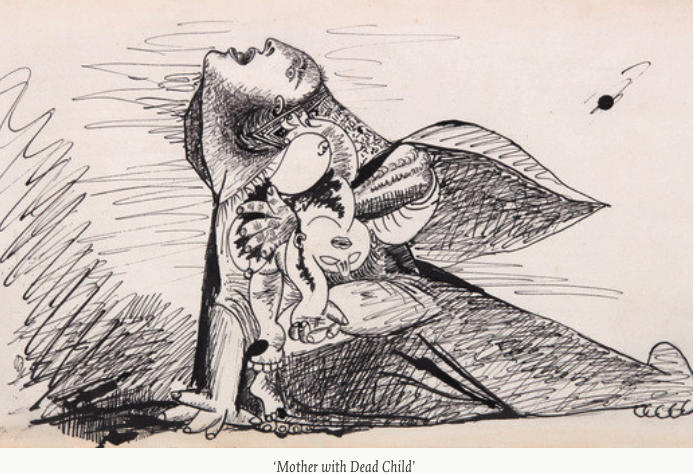 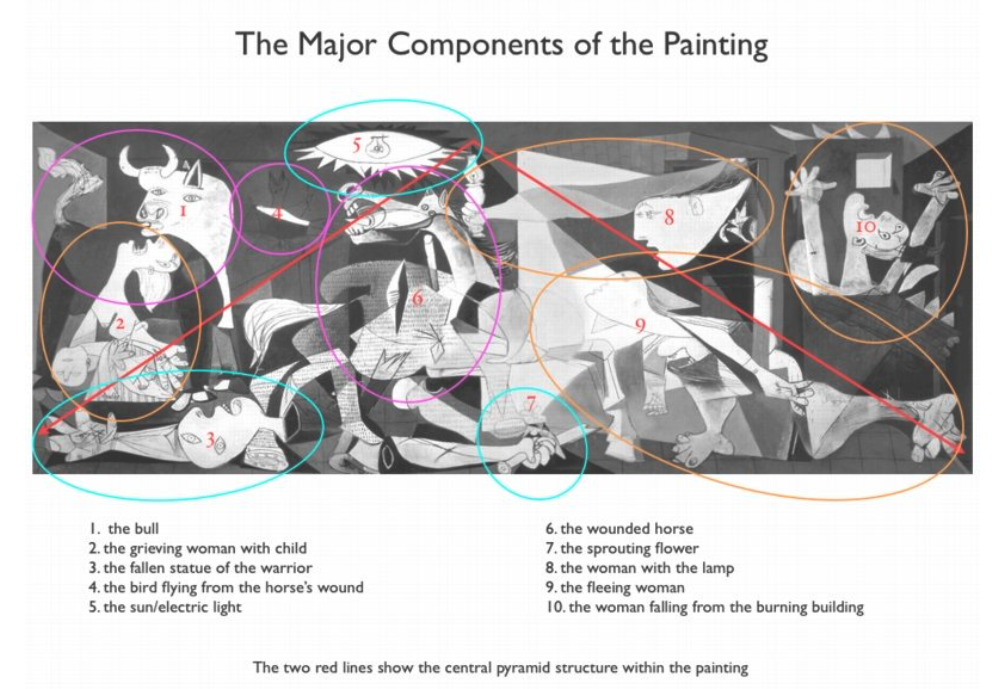